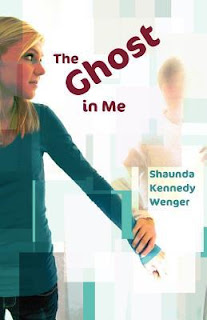 Myri Monaco has problems she doesn’t know how to deal with: a crush on her best friend’s boyfriend, a mother who’s dating her science teacher, and a “punishment” for a science project that lands her in auditions for the school play (the last place she wants to be). But most girls don’t have a ghost living at home who is willing to “trade places” whenever she’s needed. Will ghostly possession be an easy solution when problems collide? Or will Myri lose everything to a ghost wanting to fulfill her own desires?
Praise for the book
“Keeps the reader guessing.” — David Corbet
“Wenger provides plenty of humor along with suspense.” –author Carole Thayne Warburton

“I definitely recommend it.” L.D. Brown

We have a guest post today from Myri herself,
From the character’s perspective…

by Shaunda Kennedy Wenger in the voice of Myri Monaco

If you could change your current story in any one way, what would you do and why?

Funny you should ask, because I’ve got a few ideas on this topic. I don’t know what Shaunda Kennedy Wenger was thinking when she put me in her story, but she definitely wasn’t asking, “Now what can I give Myri to help her out on this troubled path?” I know this for a fact because she didn’t give me anything helpful—not even anything simplistically helpful, like amazingly good looks, or a rock star for a mother, or extreme popularity. Anyone of these things would have made any one of my problems easier to deal with, if not go away completely. In fact, if she’d built my life like that, I might not have had any problems period. So you can see why I say Shaunda Kennedy Wenger wasn’t thinking.

Instead, she had to go and make me like any other average, just-below-normal kid who happens to be stuck in a life revolving around the most abnormal things on the planet. Like ghosts.

Yeah. Isn’t that fantastic? Don’t say yes unless you’ve actually had a good experience from living with one. Obviously, I’m speaking from experience. Thanks to Mrs. Wenger, I live with a ghost who died over 200 years ago, but who happens to be two years younger than me. How annoying is that? Life couldn’t have been more embarrassing when this ghost started to take over and “help” me out. I wanted to die of embarrassment, but obviously Mrs. Wenger wasn’t going to let that happen. She needed me to figure things out.

Then there’s my mom. Mrs. Wenger gave her a job as a mortician, who spends her time working with the dead. This means my mom hangs out in a lab with the corpse of the day, while other normal moms spend their time making things to eat in the kitchen. How demented is that?

And then there’s my grandma. Don’t most grandmas spend their time playing bingo, or shuffle board, or knitting on the couch? Not mine. Mine is a spiritual consultant for spirits. As in ghosts. Not only do her clients not pay for her services (kind of impossible to do so from the “other side),” they’re not good about knocking and using the door, either.

So obviously, there are a lot of things that could have been done differently with my story, like putting my thoughts and feelings first when it came time to writing it. As I said, doing so would have made it all work out much more easily than it did.