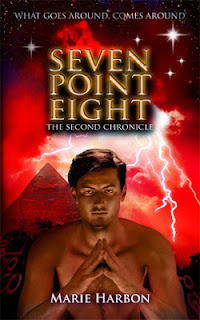 about the book
Seven Point Eight:
'The Truth Will Set You Free'

In the second instalment of the Seven Point Eight series, the legacy of the OOBE project weighs heavily on the conscience of Dr Paul Eldridge. Tahra Mamoun needs to muster all her courage and venture back into the alternate dimensions of reality. Through a series of challenging, surreal and frightening experiences, she comes to comprehend the destructive power she can yield and must face her own demons in the process.

Paul continues his quest to understand the ancient knowledge of the cosmos, while dark forces seek to hijack his research to further a secret agenda. With their lives in jeopardy, Paul and Tahra confront their enemies against an international backdrop featuring the pyramids of Giza and the peaks of Switzerland.

Meanwhile, Sam and Ava endeavour to uncover their past, even though it may irrevocably change their lives.

In a tale of courage and tragedy, love and betrayal, their lives are interwoven around the demons of one man, Max Richardson, who'll stop at nothing to achieve his objectives.

Written in the style of a TV series, Seven Point Eight draws together quantum physics, psychic powers, alternate dimensions, time travel, past lives, ancient wisdom and conspiracy in a soap opera for the soul.

I loved the first book, the second is even better!  If you haven't read the first- it's ok.  Marie does a great job of recapping the OOBE project.  You will be introduced to Paul, Tahra, Max, Sam and Ava.

12 volunteers are trapped in an inter dimensional space.  Tahra must return (spirt only- no body) to each realm to retrieve each of the volunteers of OOBE.  Let me tell you, some of these dimensions are doozies.  Marie has a very active imagination.  Poor Emilie- yikes!  You'll understand when you read the book.

Sam and Ava have a story to tell.  I found myself drawn to these characters more than any other.

This is an amazing, well written sci fi novel that is soon to be a classic.  You will 'love' to 'hate' Max, he's the main villain.

This is a very long book, but it's so good, you don't realize the length while you're reading.  I was so engrossed with the characters and the storyline, I couldn't put it down. 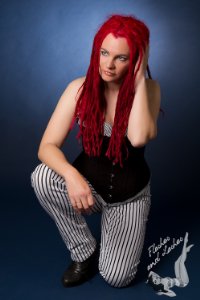 Marie Harbon has worked in both the retail and fitness industry. She has a degree in sport and fitness and taught group exercise for several years, delivering aerobics and Pilates classes. For two years, she delivered BTEC Sport courses and has also instructed dance and sport with children.

She wrote her first novel length story at the age of twelve, which in retrospective was an early prototype of 'Lost', in that her secondary school class were shipwrecked on an island and had to contend with giant rabbits and aliens. Since then, she has written on and off, evolving her style and literary maturity.

Marie is a member of the Nottingham Writers Studio and New Writers UK. Her future plans include not only continuing with the 'Seven Point Eight' series, but involve writing YA, children's and adult books, short stories, novellas and scripts.

Aside from writing, Marie has two children and lives with her son, four guitars, and reams of fabric in the town of Eastwood, Nottinghamshire, which is in England. She is a self-confessed fabric geek and purveyor of beautiful, often ostentatious bags, bustiers and clothes. 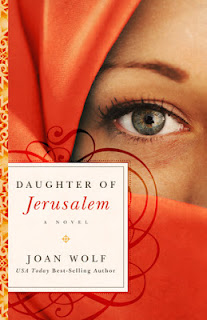 received from NetGalley for honest review

DAUGHTER OF JERUSALEM
BY
JOAN WOLF

In Daughter of Jerusalem, readers will quickly identify with Mary Magdalene – a woman of deep faith who used her wealth and influence to serve Jesus.
This fictionalized story of Mary Magdalene is, in the truest sense of the word, an inspirational novel for modern people who are looking to renew in themselves the message of Christ. It’s the greatest story ever lived, told by one of the most famous women who ever lived, and it’s a page-turner. Joan Wolf’s years of success as a novelist enable her to combine storytelling and a faith plot in this beautifully written biblical fiction.

my thoughts
I've read many stories telling of the life (fictional, of course) of Mary Magdalene. Some portrayed her as a harlot, others as a woefully unfortunate woman. This book, by Joan Wolf, portrays her in the best possible light. As a woman. A woman who is a victim of her circumstances. A young woman sold into an unhappy marriage, who finds love with another. This is a highly likable Mary. A woman I felt for, a woman I would be happy to call a friend. We laugh with Mary, cry with her, and mourn with her.

We travel with Mary throughout her life, through her many 'adventures' and her eventual meeting with Jesus of Nazareth. We see how she become a disciple of Jesus and how meeting him changes her life.

The places mentioned come to life in this book, the descriptions are so real. Having never been to Jerusalem, I was able to picture it in my mind with Ms. Wolf's descriptions.

What a fantastic book. One of the best biographies of Mary of Magdala I've ever read. I must admit, I am fascinated by this woman. I see her as a heroine. A woman who overcomes all obstacles and becomes a favorite student of Jesus. I strongly encourage anyone interested in the life of Mary to read this book.

I was not compensated in any way for my review, nor was I asked to give a positive review.  The thoughts I've expressed are my own.