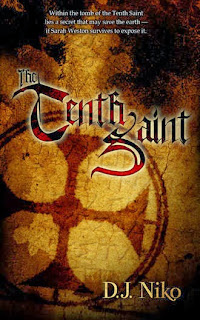 about the book
About THE TENTH SAINT

Cambridge archaeologist Sarah Weston makes an unusual discovery in the ancient Ethiopian mountain kingdom of Aksum: a sealed tomb with inscriptions in an obscure dialect. Seeking to ascertain the translation and the identity of the entombed man, she and her colleague, American anthropologist Daniel Madigan, stumble upon a lethal conflict.

Tracking down clues in Addis Ababa and the monasteries of Lalibela, Sarah and Daniel uncover a codex in a subterranean library revealing a set of prophecies about Earth’s final hours written by a man hailed by Coptic mystics as Ethiopia’s tenth saint. Violently opposed by the corrupt director of antiquities at the Ethiopian Ministry of Culture and Tourism, they’re left for dead in the heart of the Simien Mountains. Surviving to journey to Paris, Sarah is given another piece of the ancient puzzle: a fourteenth-century letter describing catastrophic events leading to the planet’s demise.

Connecting the two discoveries, Sarah faces a deadly intercontinental conspiracy to keep the secret of the tenth saint buried. Risking her reputation and her life, Sarah embarks on a quest to stall the technological advances that will surely destroy the world.

A book that will keep you guessing.  Reminded me of Indiana Jones.  Loved the story.
We travel between the past and the present, somewhat like a rollercoaster ride.
Daniel and Sarah are embroiled in a thriller adventure that will leave you guessing until the very end. I have to say,however, I couldn't see these two character together.  There was very little chemistry.  Even as the book progressed, they rarely acted as anything more than simple acquaintances.

Gabriel is just different enough, the reader is well aware that something is not quite right about him.  No spoilers here...just read the book.  There is enough action, adventure, history, and archaeology to keep you interested.  This is a long book, but a very quick read. 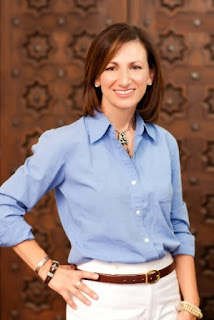 D.J. Niko is the nom de plume of Daphne Nikolopoulos, an award-winning author and journalist. Her first novel, titled The Tenth Saint, was released in March 2012 to rave reviews by both readers and the trade. In March 2013, it was awarded the Gold Medal for popular fiction in the prestigious, juried Florida Book Awards. An archaeological thriller embroidered with historical motifs, The Tenth Saint takes readers on an adventure across the globe: Ethiopia, the Syro-Arabian Desert and Abyssinian Empire circa fourth century, London, Paris, Brussels, and Texas. The Tenth Saint is the first book in The Sarah Weston Chronicles series. The second, titled The Riddle of Solomon, releases July 1, 2013.

Daphne is now at work on a historical novel set in tenth century B.C.E. Israel. The epic story details the collapse of the United Monarchy and the glory and fall of the empire built by King Solomon. It will be released in early 2015.

As a former travel journalist, Daphne has traveled across the globe on assignment, or for personal discovery. She has been to some places most of us don’t realize are on the map, and she has brought them to life through her writing for various magazines, newspapers and websites on an international scale. Her travel background and rich experiences now bring authentic detail, color, and realism to her fiction.

She is the mother of twin toddlers and, in her spare time, volunteers for causes she believes in—literacy, education, child advocacy, and the advancement of traditional and tribal arts from around the world. Born in Athens, Greece, she now lives with her family in West Palm Beach, Florida.

Praise for The Tenth Saint

“The characters are lively, and the story is fast-paced and exciting, especially for inveterate fans of the genre.” – David Pitt, Booklist (January 1, 2012)

“Like ‘The Da Vinci Code,’ ‘The Tenth Saint’ takes you to a place you have never been, creating an adventure you will not soon forget.” – Laurence Leamer, New York Times-bestselling author of ‘Kennedy Women’

“Her descriptive powers are remarkable. Whether constructing the distant past or today, whether reproducing the foreign or the familiar, Ms. Niko brings vivid, convincing sensory detail to her settings.” – Phil Jason, Naples Florida Weekly (April 2012)

“Fast-paced and filled with danger and action in interesting and less well-known locales, The Tenth Saint will keep readers on the edge of their seats until the end.”- www.FreshFiction.com

“An impressive and well-researched thrill-ride … Dark tombs, buried secrets, and apocalyptic prophecies, this book has it all!” – Ronald Malfi, author of ‘The Ascent’ and ‘Floating Staircase’

“The Tenth Saint is a clever and well-written story which piqued my interest and curiosity. I enjoyed the wicked twist at the end, which I thought brought everything together cleanly. I look forward to more of Ms. Niko’s writing!” – Star Fyre, Bibliophilic Book Blog

“The author, D. J. Niko, thoroughly researched the history and geography of Ethiopia, providing sufficient authenticity to the story line and plot to satisfy even the most skeptical Returned Peace Corps Volunteer.” – The Etritrea and Ethiopia Herald (for Peace Corps volunteers)

I don't usually discuss movies on this blog, but I have to mention the
Catching Fire movie.  We went to see it last night.  It did not disappoint.  I will offer no spoilers.
I loved Finnick in the books, and I loved Finnick in the movie.
It is action packed, from beginning to end.  My only complaint?  I have to wait to see Mockingjay.  The Mockingjay movie is to be divided into two movies.

The Hunger Games: Catching Fire
2013 Film
8.3/10-IMDb
The film begins as Katniss Everdeen has returned home safe after winning the 74th Annual Hunger Games along with fellow tribute Peeta Mellark. Winning means that they must turn around and leave their family and close friends, embarking on a "Victor's Tour" of the districts. Along the way Katniss senses that a rebellion is simmering, but the Capitol is still very much in control as President Snow prepares the 75th Annual Hunger Games (The Quarter Quell) - a competition that could change Panem forever.
Release date: November 22, 2013 (USA)
Director: Francis Lawrence
Prequel: The Hunger Games
Sequel: The Hunger Games: Mockingjay, Part 1
Characters: Katniss Everdeen, Peeta Mellark, Finnick Odair,