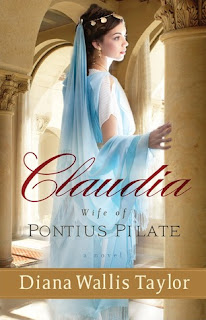 Claudia's life did not start easily. The illegitimate daughter of Julia, reviled and exiled daughter of Caesar Augustus, Claudia spends her childhood in a guarded villa with her mother and grandmother. When Tiberius, who hates Julia, takes the throne, Claudia is wrenched away from her mother to be brought up in the palace in Rome. The young woman is adrift-until she meets Lucius Pontius Pilate and becomes his wife. When Pilate is appointed Prefect of the troublesome territory of Judea, Claudia does what she has always done: she makes the best of it. But unrest is brewing on the outskirts of the Roman Empire, and Claudia will soon find herself and her beloved husband embroiled in controversy and rebellion. Might she find peace and rest in the teaching of the mysterious Jewish Rabbi everyone seems to be talking about?

Readers will be whisked through marbled palaces, dusty marketplaces, and idyllic Italian villas as they follow the unlikely path of a woman who warrants only a passing mention in one of the Gospel accounts. Diana Wallis Taylor combines her impeccable research with her flair for drama and romance to craft a tale worthy of legend.

Well written, well researched story of an inspirational woman.  Claudia is a character we know very little about.  Diana Wallis Taylor has researched her life and introduced to us a women with visions of Christ.  A woman caught in the middle of one of the most incredible events to ever happen.  The crucifixion of Jesus.

We meet her when she is a young girl and watch her grow.  She is taken from her mother and relocated to the Roman palace to become the ward of Tiberius.  She is married to Pontius Pilate.  Of Pilate, I felt  sympathy as well as anger.  He is an interesting character in this story.  He does what he must, what he is destined to do to fulfill a prophecy.   Claudia reminds her fellow Christians of this, Pilate did what he was destined, not what he wanted.

Later in life, we see Claudia as an amazing woman who overcomes many obstacles to live the life she wants.

This is a well written book, I will definitely read more by Diana Wallis Taylor