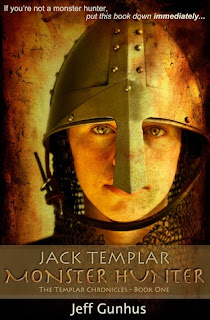 Orphan Jack Templar has no memory of his parents and only the smallest details from his Aunt Sophie about how they died. The day before Jack's fourteenth birthday, things start to change for him. At first it's great: A sudden new strength helps him defend his nose-picking friend "T-Rex" from the school bully, and even his crush, Cindy Adams, takes notice. But then a mysterious girl named Eva arrives and tells him two facts that will change his life forever. First, that he's the descendent of a long line of monster hunters and he's destined to be in the family business. Second, that there's a truce between man and monster that children are off-limits...until their fourteenth birthday! Jack has only one day before hundreds of monsters will descend on his little town of Sunnyvale and try to kill him.

As if that weren't enough, things get even more complicated when Jack discovers that the Lord of the Creach (as the monsters are collectively known) holds a personal grudge against him and will do anything to see that Jack has a slow and painful death. To stay alive and save his friends, Jack will have to battle werewolves, vampires, harpies, trolls, zombies and more. But perhaps the most dangerous thing he must face is the truth about his past. Why do the other hunters call him the last Templar? Why do they whisper that he may be the "One?" Why do the monsters want him dead so badly? Even as these questions plague him, he quickly discovers survival is his new full-time job and that in the world of monster hunters, nothing is really what it seems.

I love having fun while I read a book.   I laughed out loud at Jack's warnings during the first few pages of the book and was intrigued enough to keep reading.  I'm glad I did.  This is an amazing story.   Jack is a great character, I mean, monster hunter.

This story is well written.  Not too scary for young children.  A bit of fantasy/horror mixed together.  The characters are well developed.  The story fast paced and interesting.

I started reading the warnings aloud to my 12 year old son. He was interested enough to state "I want to read it when your done"  I gave him my ereader when I finished,  and he was glued to the reader until he finished the story.  His response..."Is there more?"  Thankfully, there is a second novel coming soon.

Any book that gets a stamp of approval from my 12 year old is a great story.  Right now, he's obsessed with Percy Jackson and not much interested in anything else.   In other words, this is an amazing story, one that encouraged him to read something other than PJ.  Must be the monsters.

I was given this book for an honest review.  I was not financially compensated in any way.  The opinions are mine and those of my 12 year old.

We are part of Orangeberry's book blog tour 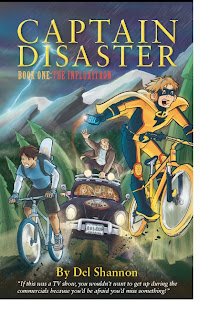 Kevin Tobin is a relatively ordinary twelve-year old dealing with the aftermath of his father's tragic death in a mountain biking accident near their home in Boulder, Colorado. To escape from his emotional turmoil, Kevin has developed his imagination into a dangerous foil and a powerful ally. While he antagonizes his sister through his superhero antics, his ability to escape inside his character's (Captain Disaster) head becomes critical to his survival after his life is once-again turned upside down a year after his father s death. A mysterious package arrives in the mail, Kevin and his best friend are hunted down by a ruthless villain set upon world domination, and after enlisting Kevin s teenage sister and her pizza-delivery boyfriend in a battle for control over time itself, the secret of Kevin s whole existence is revealed to him by a source we never expected. Del Shannon's imaginative story telling and his appreciation for the powers of family and the desire of young boys to both escape reality and prove themselves within it make this a book with wide appeal for readers of all ages.

my thoughts
A wonderful and fast paced book. Aimed for a middle grader target audience. This book was a rollercoaster ride full of twists and turns. The end (which I will not reveal) was unexpected. I think most 10-14 year old boys will relate to Kevin. I just love his imagination!
I recommend this book for all kids that like sci-fi, humor and wild crazy adventures.
I want to thank Del Shannon for allowing me to read and review this book. Please, let there be more adventures for Kevin!!!
Posted by Donna at 11:46 PM No comments: