Today I would like to introduce a wonderful book by a fantastic author. 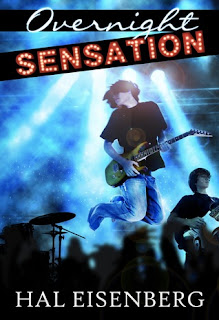 about the book:
from Goodreads

Fifteen year-old Jonah Levine is practically invisible at Applecrest High. His Facebook page is pathetic, his baseball skills are mediocre at best, and his IQ seems to drop 50 points when talking to girls. But everything changes when his rock band, Hitstreak, becomes the hottest teen sensation in the country. And now they’re about to perform in front of 15,000 screaming fans.

So why isn’t he jumping for joy?

Well, for starters, that hit on the radio wasn’t really recorded by his band. In fact, six months ago, he and his friends could barely play a note between them. And now they’re about to perform in front of 15,000 screaming fans. What begins as a mindless prank quickly spins out of control, involving his father’s secret past as a 70’s rocker, a high school bully who wants in on the action, and a powerful, ruthless, media mogul who will stop at nothing to claim the band as his own. Will Jonah prevail? Or will he and his band go down in flames and become the biggest farce in pop music history?

I LOVED this book!!!

Hal Eisenberg did an amazing job of creating a believable teenage world. The main character of the story is young Jonah. A wanna be musician with a band named HitStreak. Inadvertently, a song is sent to a radio station, a song entitled "Every Little Bit Hurts". This song gets some airtime and voila...overnight sensation. Only, the song is not done by HitStreak but by Jonah's dad's old band. OOPS!

As you can imagine, some fun and some not so fun things happen. But Jonah's family is always there for him. The book is very well written and easy to read. I found it interesting that I liked all the major characters, not something that usually happens when I read a book.

I think it will appeal more to boys than girls.

Also, check out the website at http://www.hal-eisenberg.com/contest  to hear the actual song "Every Little Bit Hurts".

and now for the
GIVEAWAY

I have one copy of OVERNIGHT SENSATION, paperback, with swag to give.


a Rafflecopter giveaway
Posted by Donna at 7:46 PM