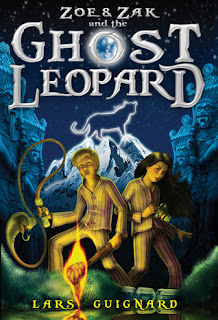 about the book
Zoe Guire just talked to an elephant. Well, technically speaking, the elephant spoke to her, but either way it was weird and, as a rule, Zoe doesn't do weird. Except the thing is, when Zoe goes along on her mom's business trip to India, things get very weird, very quickly. Soon after she arrives, Zoe finds herself tagging alongside a kid named Zak, lost in a crazy city, with no money and no way home.

And those are the least of Zoe's troubles. Because if she's to believe the scary-looking snake charmer guy sitting in the corner, she and Zak have been chosen -- chosen to protect some kind of mythical animal called the Ghost Leopard from who knows what.

Now, the further they get into the mountains, the more crazily impossible things get. Carpets fly and statues talk and if either Zoe or Zak want to make it back to their parents, or the sixth grade, or anything even close to normal, they're going to have to make some new friends, learn some new tricks, and listen, really listen to that talking elephant. Because if they don't, nothing will ever be the same again.

Read this book with my son, age 12.  He loved it.  There are not a lot of good 'boy' books (as he calls them) available.   He enjoyed this story.
It is a story full of magic, adventure and fun.  The kids get into some rocky patches along the way, but it adds to the excitement.  The book has a slow start, but I recommend hanging around, it picks up speed and doesn't slow down until the very end.

The two main characters Zoe and Zak are opposites, and they complement each other.  One is a thinker, who takes things slowly and the other rushes into a situation.

Overall, if your child is a fan of Harry or Percy, he/she should enjoy this book.

(4stars, and not 5 because I didn't like the ending)