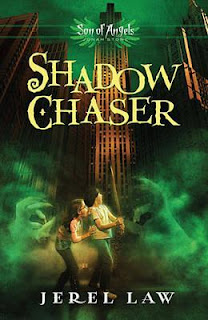 Welcome to my stop on the Shadow Chaser blog tour hosted by YA Bound.  Click HERE to see the full blog tour schedule!

Summary from Goodreads:
Join part angel Jonah Stone as he faces his biggest challenge yet!

Many months have passed since part angel siblings Jonah, Eliza, and Jeremiah Stone began their angelic training. As part angels, or "quarterlings," the siblings joined other children of nephilim to begin honing their special powers.

In this third installment in the Son of Angels series, Jonah's story comes to resemble a modern-day Job as he's faced with trials that affect his health, strength, relationships, and most-prized possessions. As he and the other quarterlings prepare for mid-term exams, their powers are tested once again in the most fierce battle against Abaddon's forces yet. Will Jonah's faith in Elohim continue to persevere as he fights Abaddon in his hardest battle yet?

Parents today are looking for fiction that makes Christianity and the Bible exciting for their kids. This series is the first Christian answer to Percy Jackson and the Olympians, the Kane Chronicles, the Secret Series, and other middle-grade series packed with action, adventure, and supernatural fights. But the message is solidly based in Scripture, conveying God is always in control.

Jonah reminds me of Job. Really, when you read this book, you will quickly relate Jonah's life with that of the Biblical Job.

Jonah is a quarterling, a child who is descended from a human and an angel. He is constantly being tested. The suffering the character faces can be difficult for the reader. This is the third in the series, and the hardest to read. I've grown to like these characters. It's tough to see them suffer through the various trials heaped upon them.

This is the best book in the series so far, Each book is better. Jerel Law has found a wonderful way to explain faith to young readers. 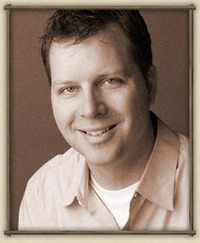 Jerel Law is a gifted communicator and pastor with seventeen years of full-time ministry experience. He holds his undergraduate degree from the University of North Carolina at Chapel Hill (go Tarheels!), and a master of divinity degree from Gordon-Conwell Theological Seminary. Jerel began writing fiction as a way to encourage his children’s faith to come alive. He lives in North Carolina with his family. Spirit Fighter is his first novel.

NOW FOR THE GIVEAWAY

AND DON'T FORGET BOOKS ONE AND TWO OF THE SERIES 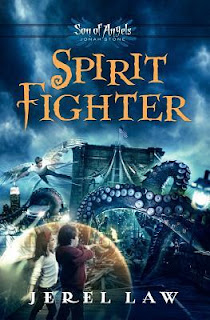 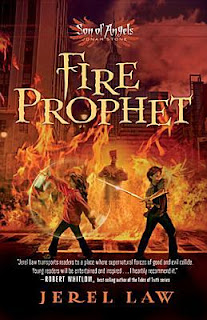 the next book in this series.