Eve Hallows and the Book of Shivers by Robert Gray 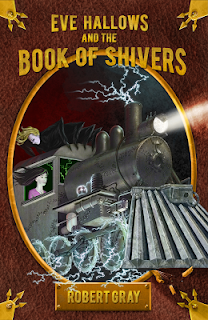 So far, Eve's summer vacation has been uneventful, but when her grandparents—traveling all the way from the monster world known as Gravesville—appear at her doorstep, she learns that the URNS Director has gone missing. Worse, a new director, bent on destroying humans, has taken over URNS.

Hilarious and bone-chilling, this third book continues the story of an unlikely hero trying to save not one, but two worlds … This time around, though, Eve's not sure she can even save herself.
my thoughts:

I absolutely love the Nightmare books by Robert Gray.

This third installment in the Eve Hallows series is the best yet.  The book is written for young readers who are looking for adventure, a bit of a fright, and a lot of fun.  This book fits the bill- in every way possible.  The characters are even better this time around.  Eve spends the bulk of the book with her friends hunting for, you guessed it, The Book of Shivers.  Third of 4 books that could help or hurt both the monster world and the human world.

I can't get enough of these stories.  Mr Gray, you have a remarkable ability to capture the attention of your reader and hold it until the very last word of the book.  When I finished, I just wanted to start the entire series over again!