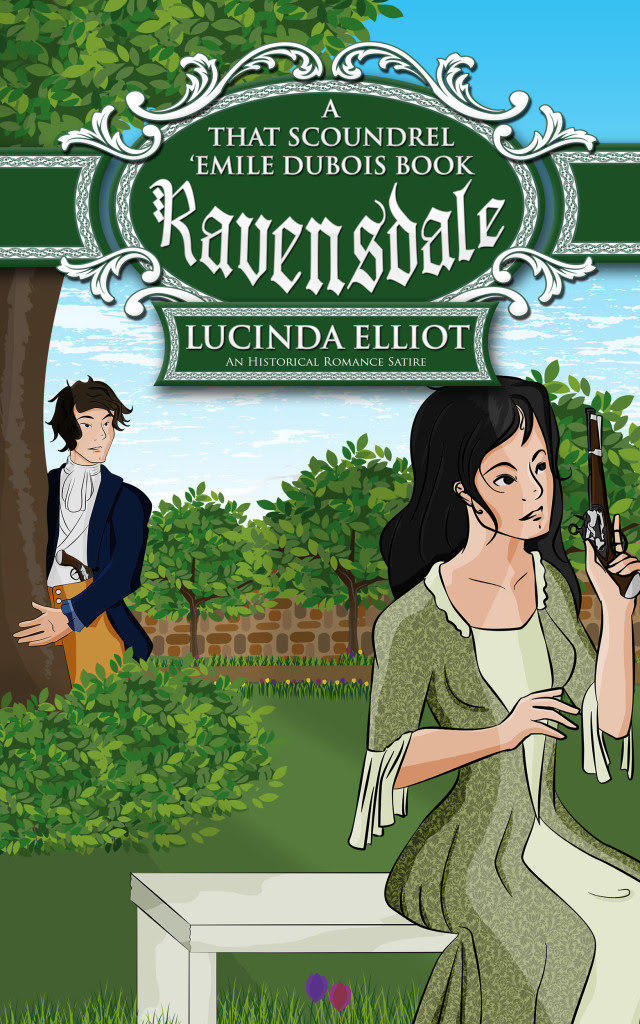 When the group of highwaymen headed by the disgraced Earl of Little Dean, Reynaud Ravensdale hold up the hoydenish Isabella Murray’s coach, she knocks one of them down and lectures them all on following Robin Hood’s example.

The rascally Reynaud Ravensdale – otherwise known as the dashing highwayman Mr Fox – is fascinated by her spirit.

He escaped abroad three years back following his supposedly shooting a friend dead after a quarrel. Rumour has it that his far more respectable cousin was involved. Now, having come back during his father’s last illness, the young Earl is seeking to clear his name.

Isabella’s ambitious parents are eager to marry her off to Reynaud Ravensdale’s cousin, the next in line to his title. The totally unromantic Isabella is even ready to elope with her outlaw admirer to escape this fate – on condition that he teaches her how to be a highwaywoman herself.

This hilarious spoof uses vivid characters and lively comedy to bring new life to a theme traditionally favoured by historical novelists – that of the wild young Earl, who, falsely accused of murder by the machinations of a conniving cousin and prejudged by his reputation, lives as an outlaw whilst seeking to clear his name.


“This was a good book. Well written and funny. As far as historical romances go, this one is quite a page turner. She turned a historical romance into something fun and different with comedy added in.” - Brenny’s Book Obsession (Amazon.com)

“I liked how Elliot poked fun at the clichés of historical romances. The chapter titles made me laugh. They were these little parody’s which gave just enough lightness to the story without turning it into a joke.” - Lauryn April (Amazon.com)

“And despite all the satire there is still an enjoyable story taking place in this book. Elliot does a fine job of allowing the reader to not only laugh at some of the absurdities in this tale but also root for the players to find their happy ending. There is plenty of emotion and heart in this book as both Isabella and Reynaud are characters of admirable quality and depth. ..I applaud Elliot for making the poetic regency romances we hold dear to our heart into something fun and different. She never insults or tarnishes what we love about the genre but allows it to blossom with comedy making it something I particularly loved even more.” - JC @ All is Read (Amazon.com)

“This was a cleverly written story, similar to a tongue in cheek Jane Austen classic.” - Gidgeemamma (Amazon.com)

“Ravensdale achieves everything it sets out to do, playing with formulas and stereotypes of older romance novels with abandon.The writer manages to pay tribute to the genre while having fun at the same time. In one paragraph, the sturdy no-nonsense heroine muses on the cliches of the plot she finds herself in, capitalizing all the character types such as the Wild Young Buck, the Villain of the Piece, and the Sweet Young Maiden. You can see her eyes rolling as she teases. But then the novel transforms, as the stereotypes become real people under the clever typing fingers of Lucinda Elliot.” - Jo (Amazon.com)

“If you enjoy Georgette Heyer-style period romances, you’ll probably enjoy "Ravensdale". However – and this is what is so clever about this novel – if you don’t, then there’s a good chance that you’ll enjoy "Ravensdale" anyway. It provides you with both characters that you can genuinely like and care about, an interesting story, and a parody that is at times hilarious.” - Mari Biella (Amazon.com)

“I didn’t want it to end. Ravensdale is a thoroughly enjoyable read.” - Anne Carlisle PhD (Amazon.com)

“I was so engrossed that I couldn’t stop reading and ended up with a terrible headache, but it was worth it. What an amazing bunch of characters! First of all, there’s Lord Reynaud Ravensdale, the Disgraced Outlaw and Earl: this is a character to really fall in love with. He’s intelligent, quick, wild, impetuous, an amazing shot, and absolutely bursting with honor. ..Isabella is an amazing kick ass woman, and a true, perfect match for the larger than life Ravensdale.” - Ral in the West (Amazon.com)


Lucinda Elliot loves writing Gothic style stories, which isn't surprising because she was brought up in a series of big old isolated houses which her parents were refurbishing (it wasn't so fashionable back then). After that, she lived, studied and worked in London for many years and now lives in Mid Wales with her family.

Her interests do include weight training and body shaping,and she was once a champion Sports fighter, but apart from that her interests are quite geeky. Reading classic novels, conservation, gardening, and even names and their meanings (bring on the carrot juice). She loves a laugh above anything.

For more information please visit Lucinda's website. You can also connect with her on Goodreads.

Thursday, September 25
Review at "Good Friends, Good Books and a Sleepy Conscience: This is the Ideal Life."
Spotlight at Historical Tapestry

Sorry to say, I couldn't finish this book.  Barely made it through the second chapter before I  put it away.  Perhaps I'll try again, but at this point, it's just not my cup of tea.

Just for you to decide for yourself, I am including an excerpt

Enter the Disgraced Earl Turned Outlaw’s
(Must Have) Devoted Follower

“You think they’re still after us?” Longface glanced back as he and his companion made their way down the bank of a stream in the middle of a birch wood.
“How should I know, you idiot? If we’ve shaken ‘em off so damned easy, I’ll be amazed.”
They rode on some time without speaking. As the horses scrambled up a bank, the younger man suddenly grinned, shaking off his gloom. “There’s a piece of fancy shooting, they’ve winged your hat.” He reached out and snatched it off his follower’s head, his smile fading as quickly as it came. “It’s not conspicuous or anything. Idiot, you’d have shambled into an inn like that for a surety.”
“How’d it stay on my knob?” Longface stared at it.
Reynaud Ravensdale laughed heartlessly: “I thought I saw it dance up and down. Lucky escape for you, eh?”
Longface burst out, “I call it foolishly quixotic, risking your neck like that to attend the funeral and then uncovering yourself. Paying your respects to your father was all fine and proper, but not sensible. It weren’t even as though you’d not seen him before he passed away.”
The other scowled and said nothing. Perhaps he was being Resolutely Silent.
Longface went on, “It’s no good giving me one of your haughty looks, neither. How many times have I told you, it’s all well and good to be a Viscount – well, now you’re an Earl – but it don’t do you no manner of good now, so you must set aside them aristocratic ways. I’ve told you a thousand times.”
“Try a million, Longface.”
“No, but you’ll need telling one million times more, Mr Fox*, though being discreet, I never make mention of what is known to me in front of others…Someone must have tipped off the Redcoats.”
“Obviously, seeing they don’t have the wit to find us out for themselves. Then you obligingly led ‘em to me.”
At this, Longface couldn’t contain himself. He spluttered: “Me?! Nobody followed me – and me risking my neck to warn you of the ambush you wandered into unawares!”
Reynaud Ravensdale or Mr Fox stared at him, eyebrows raised. “You idiot. I told you not to tag along. On the matter of your idiocy, by the by, how much d’you have in your purse*?”
Longface searched though his pockets. His long jaw extended.
Reynaud Ravensdale suddenly hissed, “Quiet! What’s that?” They paused, staring back, and went on listening for another minute.
“I only hear woodpeckers going at it.”
They started their horses forward again. Longface searched his clothing a last time before admitting, “The confounded thing’s gone.”
Reynaud Ravensdale made a coarse joke. “Jack and I had better sense than to lose our money so. None of those wenches in that den were to be trusted from any point of view. Twice over I caught the floozy perching on my own knee with her hands in my pockets and she laughed in my face outright.”
Longface looked yet more mournful. “I’ll have to Wait and See, then. Lucky we’re headed towards town and medical advice.”
As his companion snorted in contempt, Longface went on, “Pshaw! It’s nothing that a spot of mercury* won’t cure. What’s the point of guarding our health? We’ll be swinging at Tyburn before we’re thirty.”
“I always forget you’re short of thirty.”
Longface winced. “It’s these teeth missing ages me.”
The other didn’t bother replying. They rode on in silence for some minutes, and then he began almost gently, “What you say minds me, Longface; for your sake we should go our separate ways. I’m a careless rogue, for sure; best save your skin and leave villainy while you can. You have those papers. You can start again and lead a decent life.”
Longface shook his head. “No, not until at least after the next great takings. I’ve not enough put by to live comfortable and marry a self-respecting woman.”
Reynaud Ravensdale made another coarse joke about an unexpected wedding present Longface might give a bride if he didn’t take more care. As Longface flinched again, he added more suavely, “Longface, I’m urging you strongly to look out for yourself.”
“No, I ain’t leaving you. I’m older and wiser than you and them others, and I can make Due Allowance for your Youthful Impetuosity.” He liked the sound of that, and repeated it.
His companion was unmoved: “Listen, you simpleton, as your chief I’m telling you to go away now.”
The other shook his head, smiling gently. “Not until the time is right.”
Ravensdale scowled. His horse, picking up his mood, turned round and tried to snap at him. He hit it, cursing.
Longface murmured up at the trees, “I don’t take it amiss; he ain’t bad hearted; just a wild young buck what is put out how things is turned out.” He examined the bullet holes in his hat. Suddenly he asked his Chief Brigand, “Do you have a sister?”
The other glared, outraged: “What is that to you, looby?”
“I dunno. I miss mine, sometimes.” Longface thought of Meggie’s sorrow that he hadn’t stayed in the haberdashery, her warnings against a life of crime. Then he spent longer thinking of the hot cakes that she always made.
Suddenly, Reynaud Ravensdale spoke, as if he couldn’t stop himself, though despising himself even as he did: “I’ve a girl cousin who was as a sister to me.”
As the trees began to thin, Ravensdale or Mr Fox turned on Longface: “Take that damned thing off before we get back to civilization.” He gave a Bitter Laugh: “Civilization? That is one place where we shan’t call in.”

September 1781
Retrospective
With the Conniving Cousin