THE PRIESTESS AND THE PEN 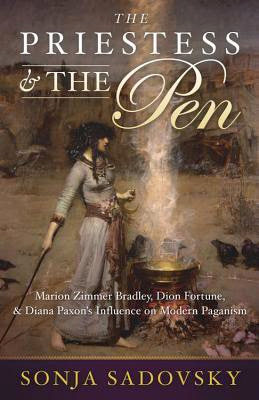 This groundbreaking book by brilliant debut author Sonja Sadovsky shines new light on how three profound minds shaped the course of history. The fantasy novels of Dion Fortune, Marion Zimmer Bradley, and Diana L. Paxson influenced the image of the priestess in Neopagan and Goddess-centered spirituality throughout the world. The Priestess and the Pen shows how their work revolutionized womanhood, created space for women to reclaim their power, and energized the women's equality movement.

Presenting a radical reinterpretation of the Goddess as four-fold rather than three-fold, The Priestess and the Pen adds dimension and relevance to the traditional Triple Goddess archetype in a way that has never before been considered with such daring reverence. This revolutionary work is poised to become the foremost historical resource and contemporary interpretation of the Pagan priestess, taking up the torch of Drawing Down the Moon and Triumph of the Moon.

The Priestess and the Pen is a powerful piece of work. It is labeled "groundbreaking". This is a fair assessment of Sonja Sadovsky's book.

This is not light reading material. The reader must sit and concentrate on the subject at hand, but it will be worth it. Sadovsky was able to open my mind, broaden my thoughts and increase my understanding of her viewpoint.

Some key ideas from the book:
"Priestess is a symbol of independent female authority, and a living link to the Goddess she serves."
There are four types of Priestess', each type is reviewed and explained in the book.
1. Earth Mother
2. Moon Mistress
3. Witch Queen
4. Warrior Queen

The Goddess herself is:
1. eternal
2. light and dark
3. maiden, mother and crone
4. dark mother of mystery.

Sadovsky further explains that the threefold goddess is not always accurate nor fitting. The goddess has a 4th face, "hidden but key to personal power and self identity."

I think she more than adequately succeeds in her goal. My understanding of Modern Paganism is greatly enhanced by reading this book and I recommend it to anyone with an interest in Paganism, or the works of the three spotlighted authors.

FYI- everything in quotation marks was directly quoted from Ms. Sadovsky's work, the PRIESTESS AND THE PEN.