TODAY'S GUEST IS KATE BENZIN, AUTHOR OF TRANSFORMATIVE TRAVEL.  SHE VISITS US WITH A GUEST POST

Kate Benzin - What Kind of Freedom Do You Want?

Do you really know the answer to that question?  Many people say they don’t like being a slave to their job. They say that they want to be free.

What I finally ended up doing is far better that those two options, but you can see that I was pretty serious about getting that lifestyle. I was willing to sacrifice half of my life in order to liberate myself the other half – doing what I wanted whenever I wanted, wherever I wanted, with whomever I wanted.

It took me a long time to develop this lifestyle. You can imagine that it’s not easy to find a job for half a year every year. Yes, I could do temp office work and I was good at that. But unfortunately, that didn’t bring in enough money in six months to support me the other six.

I went from job to job – teaching Spanish, working as a secretary, doing word processing, working as a waitress, and on and on. I also tried several businesses – a pet album that I sold at dog shows, import/export, making dog biscuits, and more.

I don’t belong to that group of people who only want to work 4 hours a week until retirement or who want to spend every day free as a bird, lounging on a beach in some beautiful tropical country. I think you can see that I was willing work hard in order to attain my goal of six months total freedom every year.

I achieved my goal when I became a tour director. That wasn’t instant success either because the first two companies that I worked for didn’t schedule their tours in such a way that the tour director could work enough to gain financial independence for the low tour season. But I hit gold on the third company – I worked enough and made enough money in six months to be financially independent the other six.

So now you may be wondering whether or not that lifestyle suited me. Some friends told me that they knew me well enough to predict that I would quickly get bored having so much free time. And sometimes when a person achieves a goal, he or she finds out that the goal wasn’t really as good as it seemed.

Well, in my case, it worked out perfectly. Not only was I thrilled with having the freedom of choice, but I used that freedom to achieve another goal – that of becoming a writer.

So now that I work as a writer full time, I find myself writing about how to fulfill dreams. My latest book Transformative Travel is the story of fulfilling one of my lifelong dreams – trekking in the Himalayas. That was what I did the first time I had six months off. Yes, I fulfilled two dreams at once.

Have you figured out what kind of freedom you want? 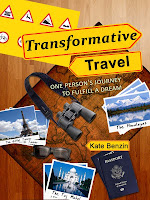