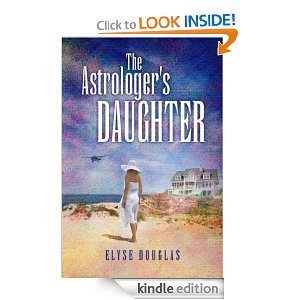 Elyse is here with a guest post and answers the age old question...

A Reader or a writer, which would you rather be?
by Elyse Douglas

Elyse:  Reading is much easier than writing.  Let’s face it, you just sit there passively and enjoy the fruit of someone else’s work.  You engage your mind and your feelings but you’re not forced to express a whiff of a feeling or grapple with a complex thought.  Your mind can wander.  You can slip into someone else’s world for a while and enjoy the flow of emotions and memories and fantasies it provokes… and then tune out.  You can be in Paris or Maine or Baltimore, on a cruise ship to the Caribbean, at a stockbroker’s lavish NYC apartment, or sitting in a summer cottage on Martha’s Vineyard, about to jump naked into a hot tub with a stranger.

If you’re reading Virginia Woolf or James Joyce, you can get lost in the rhythm of the prose, even if you can’t be sure exactly what the story is about.  You can “ooh” and “ah” at the mastery of Steinbeck’s language, the cleverness of Franzen’s plots, and the calm clarity of Cather’s descriptions.  If what you’re reading is good, though, you’re probably going to want to write a response of some sort:  a story like it, a poem like it, even a paragraph in imitation of the style.  And then you start on your own poem or story or novel, and the work begins.  YOU’RE creating the world, sister and brother, so you have to get your fingers moving and dig deep.

And the novel never goes in the direction you believed it would when you started.  You start out thinking you’re going to write about a woman who wants a baby, and you end up writing about a man who’s running for president.  You have to keep the plot fresh and interesting while providing show-stopping descriptions and scintillating dialogue.  You need to be poetic without writing poetry; and above all, you have to show and not tell.

And then once you have your first draft, you have to review it; edit it; rewrite it; have someone else edit it; read it again; proofread it; and pray your printer doesn’t run out of ink before you get it printed out for your spouse’s final read-through.

And then comes the hardest part of all:  trying to get someone else to read it and publish it.  You try that route until you have a scrapbook of rejections, and then you give up and decide to publish it yourself.  You have to get it formatted for e-book readers you’ve never heard of or seen.  And then there’s the marketing… how do you get it read by people who don’t know you?  You wait.  Will we sell more than ten copies a week?  Will anyone out there read it?  Will anyone care?

My niece calls what Douglas and I do “a hobby.”  Yeah.  A hobby and an obsession.  We must be crazy to write novels.  Obviously, we have to do it, or we wouldn’t bother.  We’d just sit down with a glass of wine, read a good book, and relax.

Joanna Halloran, a best selling writer and astrologer, lives in a beach house overlooking the Atlantic Ocean. After a violent storm, she roams the beach, glances seaward and spots a man clinging to a piece of wreckage, being tossed helplessly. She dives in and pulls him safely onto the beach.

Robert Zachary Harrison is from a wealthy, political family. As he slowly recovers from a private plane crash, he and Joanna fall in love and spend passionate and sequestered weeks together. But because of family duty, Robert makes the painful decision to leave her and return to his fiancée and political life. He departs, not knowing Joanna is pregnant.

Twenty five years later, Senator Robert Harrison is running for President of the United States. In the midst of a contentious presidential campaign, Joanna’s daughter, who has a passion to expose secrets, seeks revenge on her father. She is also falling in love with her father’s adopted son.

As secrets emerge, Joanna and Robert meet again and confront the past and present. Robert confesses a secret that Joanna had never known. Now, on the world stage, they struggle to keep their families and careers from destruction.